Nearly two weeks of being sick has given me the (unplanned and fiercely unwanted) opportunity to rest.  Forced rest.  I’ve never taken well to being forced to do anything, including this.

Still, as I’ve felt better my mind has returned to its normal ability to mull over things I read, conversations I’ve had, people I know.  I recently read Sonia Sotomayor’s memoir “My Beloved World” — a beautifully written, inspiring and hopeful book.  In the preface she writes ~

. . . . experience has taught me that you cannot value dreams according to the odds of their coming true.  Their real value is in stirring within us the will to aspire.  That will, wherever it finally leads, does at least move you forward.  And after a time you may recognize that the proper measure of success is not how much you’ve closed the distance to some far-off goal but the quality of what you’ve done today.

And I have been working again, though still coughing and snuffling.  Here’s proof ~ 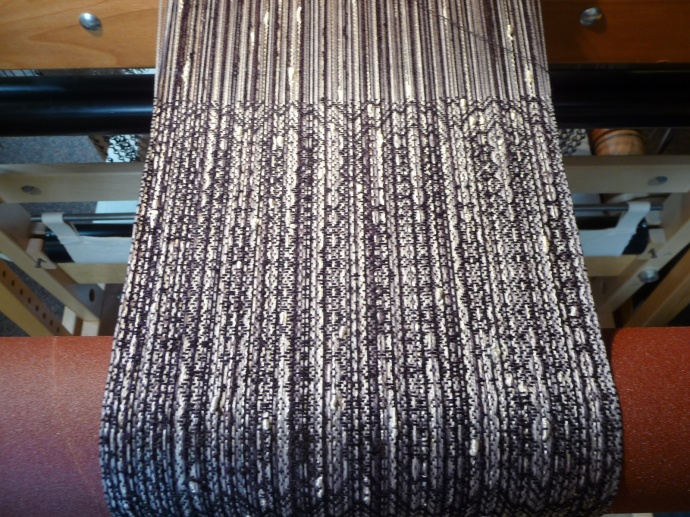 This the first of the Grey Scale series of scarves, woven with black tencel for the weft (crosswise thread) in a fancy pattern which is quite subtle in the cloth.

This is the second one, woven with a ruby red tencel, again in a fancy twill pattern which in this case is more apparent.  The bonus on this one is that the two faces of the cloth aren’t identical (as the black-weft one is); you can get an idea of this effect here ~

The lower level here is the “backside” of the scarf, and shows much more of the red weft than the “frontside”.  That’s because this is what’s called an unbalanced weave.  Intentional, not a mistake.

These scarves (the first two of five in this series) are even more interesting than I’d expected, something of a surprise to me.  Quality work today.

2 thoughts on “Able to Think Again”