Because I took such a long, unplanned vacation from this blog for the last three months of 2015, there were several events of note which haven’t been mentioned here.  The most significant was the decision to purchase a second loom — an eight-shaft Baby Wolf made of cherry, with a matching bench.  Meet Beulah, who arrived in late September ~ 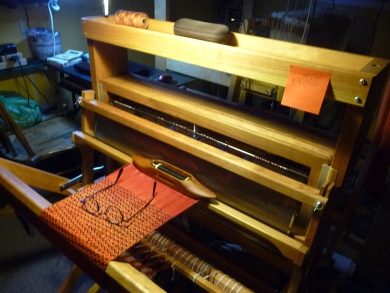 The Baby Wolf is far less complex than the big AVL production loom, yet will still give me many opportunities for designs both simple and complex.  It feels small and friendly, and has the loveliest oil-finished smoothness on every surface.

Because it is a traditional loom, the body mechanics of the Baby Wolf’s use are very different from those on the AVL.  That’s a good thing, as the repetitive motion of weaving — as well as the scritchy postures often assumed during threading — are hard on one’s body.  Being able to switch back and forth between the two looms makes it more likely my body won’t develop significant problems.  Since I already have an underlying neuro-muscular condition of many years’ standing, I’ve learned to adapt and to coddle where necessary.  Varying the tools I use to do this work makes longevity in the craft far more likely.

The second significant event of the fall was a five-day weavers’ retreat in early October, of which I was the organizer.  We gathered here on Whidbey Island at Camp Casey, near Coupeville — fourteen people (including myself and instructor Kathrin Weber from North Carolina) from places scattered around the West and Southwest.  I’d never organized such an event before, but with a few minor exceptions, it went off without a hitch.  Plans for the 2016 event are already well in hand.

Below are some photos from that week, both weaving and dyeing.  You can see that no one was shy about the plunge into intense color. 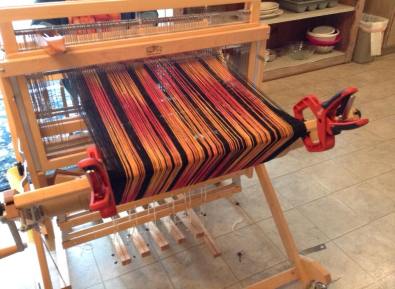 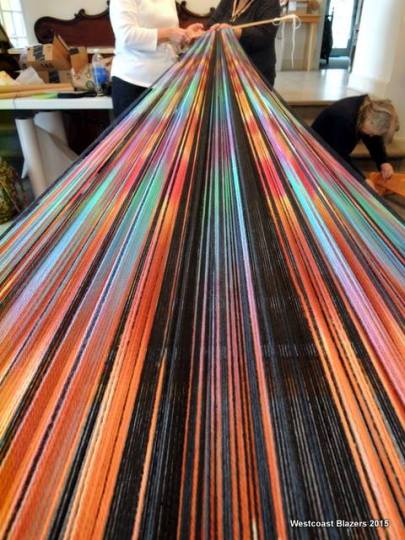 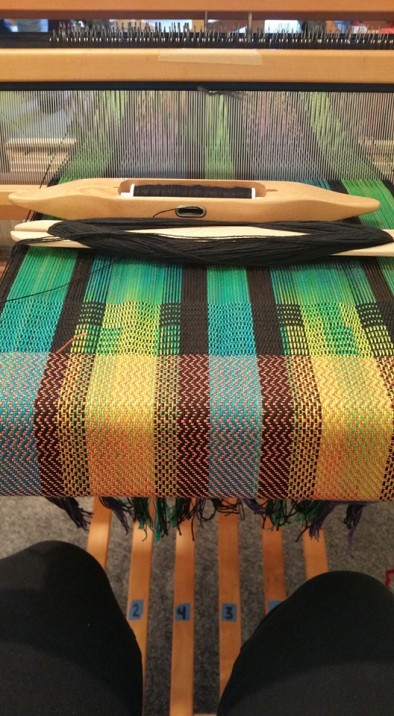 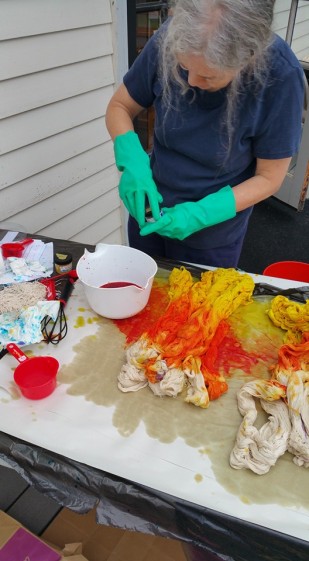 It was a wonderful event, with women who mostly hadn’t met before, yet who all have a deep and abiding love for this craft.  The new friendships formed during that week, and the continuing connections we enjoy, enrich both the weaving we do and the commonality we share on so many levels.

For me, the underlying motive that persuaded me to take on this sometimes-challenging project grew out of my awareness that weavers — like almost all artists and craftspeople — generally work in solitude.  The creation of a community of weavers who know each other, depend on each other, encourage and inspire each other, has long been my dream.  That week, and the one coming later this year, represent (among other things) my ability to shift the dream into reality.